Lola and the Eggs: A Revenge Saga, chapter 2…

This saga started with a tale of revenge. Like a canine Darth Vader, Lola is intent on establishing herself as the dominant power in this universe. While her methods are unorthodox, they will strike fear into the hearts of the puny humans who think they are in charge. Catch up with chapter 1 here. We left off with Lola hatching a dinosaur egg, the feared Tyrannosaurus Rex.

What I didn’t tell you was that Lola has more than one egg. I’ve located her dino egg hiding place and found there were in fact five dinosaur eggs. Each one is a different color, leading me to believe that there are multiple species involved. I asked Lola to tell me about the eggs, but she evaded all my attempts by lying down and showing off her belly.

I’m helpless to that tactic, I have to give her a rub!

Luckily, I’m a skilled Lola interrogator and I was finally able to glean some answers. Lola’s dinosaur nest is part of a four-pronged attack designed to recover the canine rights that Lola feels she has been denied. Each dinosaur will serve to strike fear into the hearts of the humans and ensure Lola gets exactly what she wants.

Lola’s newest baby dinosaur is very apropos – Lola loves to dress up in a Triceratops costume while watching her favorite dinosaur movies. Canine and dino are both brindle colored, comically large heads, and a short, stocky physique that is indicative of their snacking lifestyles. Not one to run when walking will suffice, they both just want to have a nice cuddle on the couch. Unfortunately for the humans, Triceratops are huge and will squish us if we try to keep them off said couch. 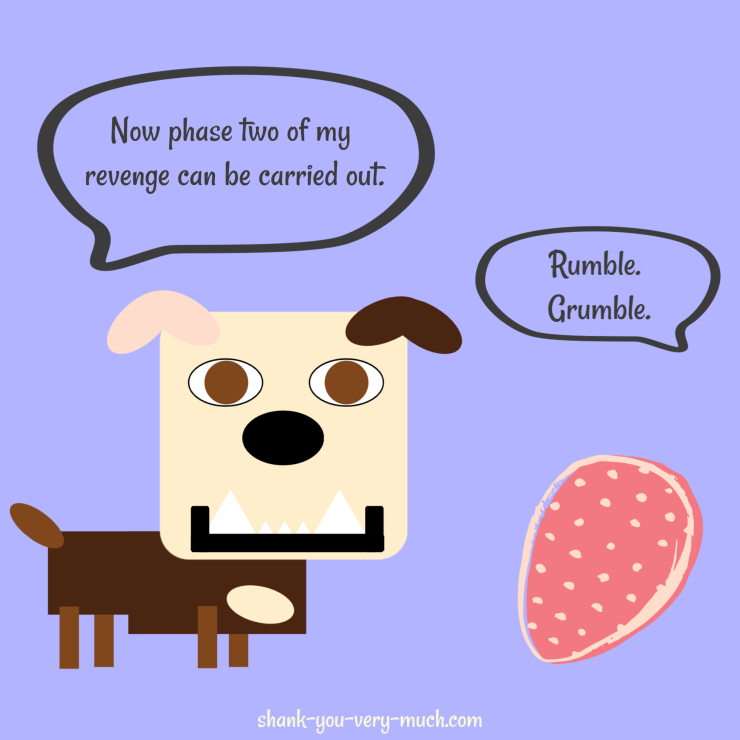