A few weeks ago I noticed a red lump on Lola’s back leg. Of course I immediately yelled out cancer, hugged her so hard she burped, and then proceeded to give her a full body lump exam while on the phone scheduling a vet appointment.

I took her in to the vet and I was immediately reassured when the doctor said she thought it was nothing. But before you think I’m crazy she added, “but we need to send it to pathology to be sure it’s benign.” Benign…BENIGN!! That means there is a possibility, however small, it could be malignant! And my head exploded with worry and my blood pressure instantly shot through the roof.

Five excruciating days later, the vet calls and tells me to get off the ledge. Lola has a benign fatty tumor that is “rapid growing and will need to be removed if it doesn’t go away in a few weeks.”

I thought you told me to get off the ledge?!?!

I was back on the ledge because Wild Child is not one to leave it alone. Lola earned her Wild Child nickname from her previous vet after ripping her stitches three times. I warned Lola to stop licking the lump. I warned her to not bite it. I even warned her to stop looking at it, just in case she got tempted. She didn’t listen…

She now has to wear a humongous cone because her wild ways were not curbed with the one designed for a dog her size. 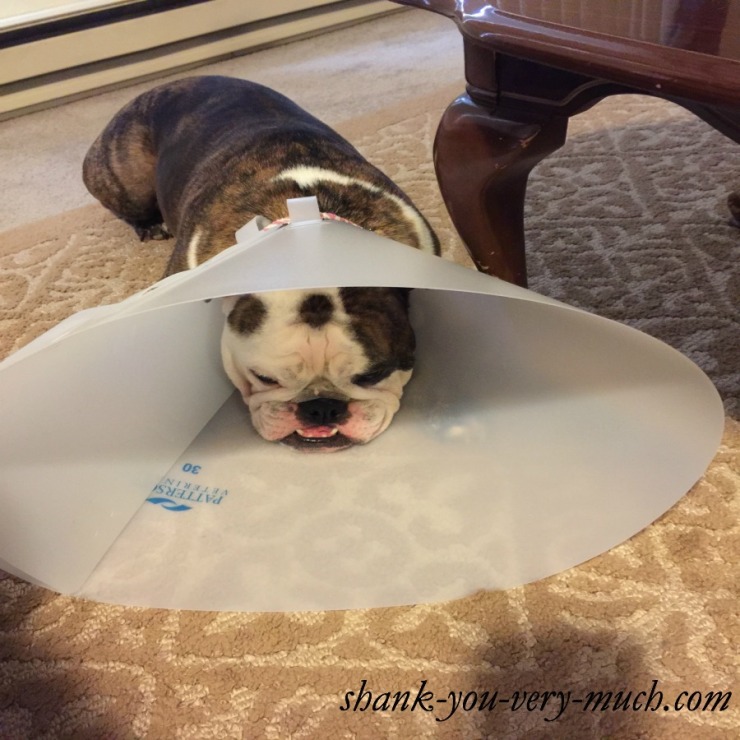 Are you listening now, fathead bulldog?!???!