I’ll just have the salad…

I am not ashamed to admit that I am a fat kid. I have worked very hard to earn the accolades that come with my status. I frequently impress people with my skills at mimicking a statue for hours on end – with only my eyes moving as I track the tv screen. I have also been commended on my ability to eat foods that would lay out the average human – like a deep-fried Oreo. While everyone else could feel their arteries clogging, I was plotting how many I could eat before I died.

I stopped at two because I got nervous that no one would be on hand to do CPR if things went wrong.

Lately though I’ve been peer pressured into visiting my doctor since I haven’t had a physical in a few years. Before you jump all over me, I have been to many, many doctors in those three years. Once when my appendix tried to murder me in my sleep – I’m still a bit bummed they wouldn’t let me see if after it was removed. I also visited the doctor about a dozen times before my gallbladder made its final attempt on my life and they decided to yank that organ out. Once again, they wouldn’t let me see it, they acted as if I might try to steal it to display in a jar to freak people out or something…

I made the appointment to visit my primary doctor and then I had a moment of panic. 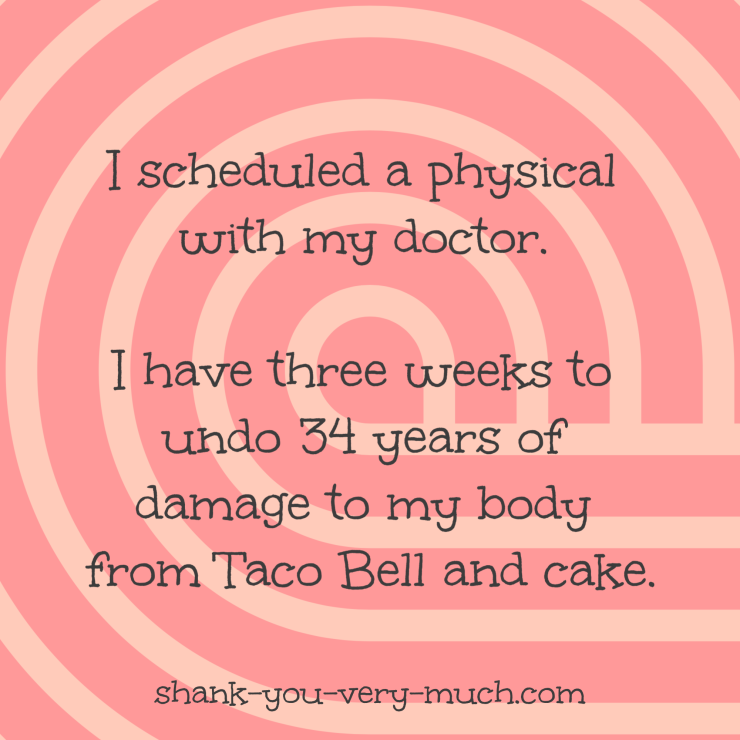 What if my rugged lifestyle was leading me towards diabetes and heart problems? Would the doctor make me give up my beloved bacon and cake? If my cholesterol wasn’t perfect would the doctor snatch the very precious cheese out of my hands? Would I be forced onto a salad diet, dressing on the side?! I can’t be one of those people! I can’t, I won’t!

I had no need to worry. I can now tell anyone who cares to listen that my body is a ridiculously well-tuned machine. All my labs came back excellent except for that bastard Vitamin D. I get a pass on that one though, practically everyone in WA state is deficient thanks to our lack of sunlight. The doctor was thrilled that she didn’t have to give me her “you are about to develop a serious disease and die” speech that makes people cry.

Someone bring me a deep-fried Oreo! I’ll also take some cake if you’ve got it!