The Brits have arrived…

Well, their food did. I finally got my shipment of food from the British Corner Shop and I am puzzled, excited, confused, happy and bewildered all at the same time. I’m planning on holding taste tests with some friends and giving you guys the real dirt on what the heck is up with these American companies putting all sorts of crazy ingredients into my version of the food, and then removing all of them for the British version of the food.

A little reminder, I don’t actually care about the ingredients and nutritional value, I eat Twinkies and Spam so obviously this isn’t a health website. My goal here is to find out who is getting the yummier food and who’s being saddled with the crappy tasting product – which will serve me in retirement planning should I decide to go where the food takes me.

Today I’m starting on the bread. 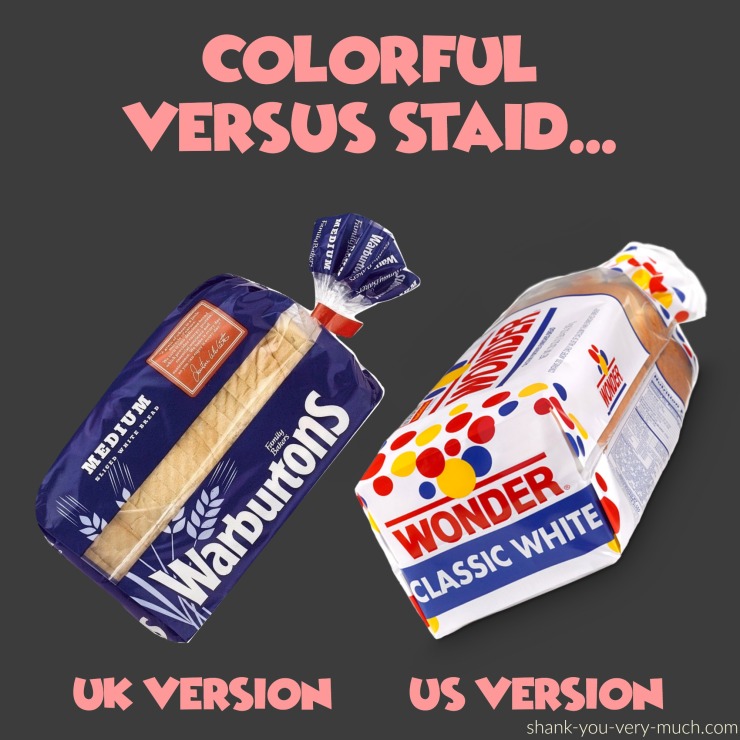 I was puzzled by the immediate difference in the size of the loaves. The US version was almost twice as many slices as the UK loaf. I was even more puzzled when the slices turned out to be the same thickness. I would have to buy double the number of loaves if I lived in the UK. As soon as I opened the UK bread I noticed a smell difference. American white bread smells very sweet, the UK stuff smelled like I had a bread cooker in my house and it had just finished baking. It was wonderful.

To test the deliciousness of each bread, I decided to make chicken salad sandwiches.

The texture of UK bread is completely different. The slices are slightly smaller, much denser, and have almost no crust on them – which is a delight since I like to take the bottom crust off my sandwiches.

I had to toast the slices in order to get them ready to receive the chicken salad mixture. US bread turns brown in the toaster, but the UK bread just didn’t seem to change color. It did get crunchy like it is perfectly toasted, but the color doesn’t change. Maybe the UK has special toasters that magically toast bread without changing colors. Whatever it is, I loved the fact that the UK toast didn’t make a huge flaking mess on my plate and hands as I ate.

The UK bread won me over with no effort due to its delicious smell and cleanliness even when toasted. I also liked the dense quality of the bread since I often find myself loading too many condiments and making a mess of my hands. The clincher came when I got to the crust and realized I didn’t have to cut it off in order to make the sandwich palatable – a win for children across the world.