Nightlife is different for those over 30…

Last night was a weird night. Hubster and Lola went to bed at their customary 10pm and I was left to my own devices until I got sleepy. Sometime past 1am, after several snacks, a cheesy yet awesome SyFy movie, a home improvement show or 3, and a comedy routine, I was finally ready for bed. I snuck into the bedroom like a ninja, if a ninja stubs their toe on the bed frame and hops around until they collapse in a heap on the edge of the bed. But I was in bed, that’s all that really mattered.

They really need to make a movie about a chubby ninja who can’t maneuver in the dark, I could be the stunt woman on set!

Fast-forward two hours and I’m still not sleeping. I got so desperate to accomplish something that I laid in bed and shopped on Amazon. I loaded a cart, hit pay and thought that accomplishment would help my mind tick off one more to do item on the list and I could ease into sleep.

There would be no easing on this night.

An hour later, I was on Amazon once again, thanks to the iPhone stationed close to the bed. Order number two was placed and the phone abandoned once again as I sought out sleep. Sleep that wasn’t coming.

By 4am Lola was over my ridiculous antics. She literally kicked my ribs until I left the bed. I’d like to say that I’m the owner and I rule the home, but that would be a lie. I left the bed and decided to do something worthwhile until I could actually sleep. After spending a few hours organizing my office, Hubster woke up for the day and ordered me to lie down and attempt to sleep. I fell into bed “for a short nap” and was asleep before my head hit the pillow.

I was awakened four hours later by the ringing of the doorbell. A doorbell that didn’t work when I moved into the home but I foolishly thought was worth fixing. I am regretting that decision and will be disconnecting wiring as soon as I’m sure I can stand on a ladder without falling off. So, I guess that would be never.

I obviously didn’t make it to the door to see who was there, my clumsy ninja routine also plays out when I leave the bed each morning. I did however check my email and like a drunken person looking at text messages from the night before, I am baffled by the things I bought on Amazon.

Nobody warned me about these pitfalls of my 30s. 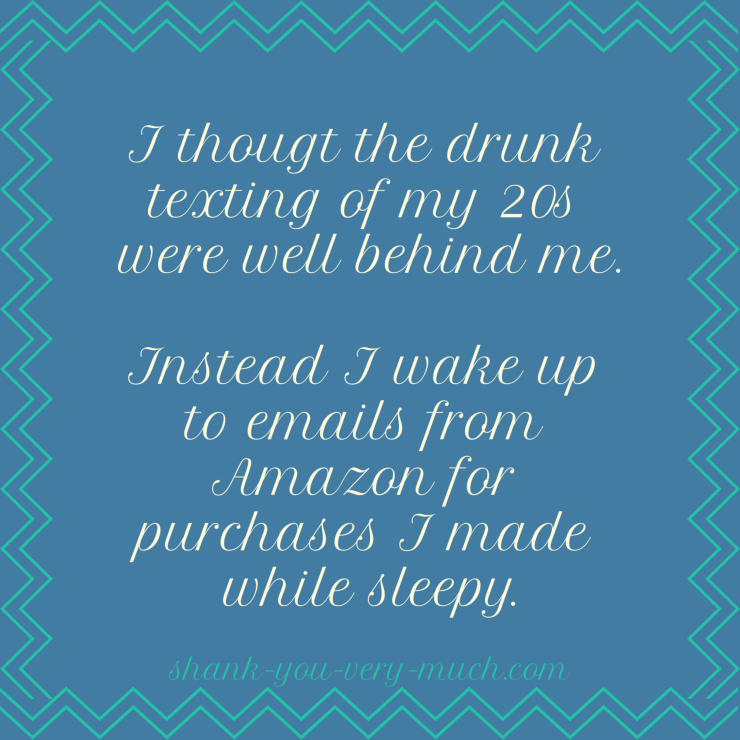 42 replies on “Nightlife is different for those over 30…”