Many pizza rolls were harmed in the making of this blog…

Well I’ve done it! I’ve beaten (or eaten) my way through a two-week slump where there were virtually NO funny ideas coming out of my head. I just woke up each morning at a reasonable hour, thought mundane things that made no one laugh, and then went to bed promptly at 10 each night. Hubster has a boring day job and we live like we’re 90 years old.

For the past two days I’ve worked hard to wreck this whole routine so that my brain could regain its fabulous sense of humor, complete with twisted ideas on what is considered fun in polite society. (You’ll hear more about that later.) First, I stayed up two nights in a row until I saw the sky start to turn blue again. When my eyes were blurry and burning, I would tuck myself into bed and not awaken until lunch time. Second, I ate a lot of pizza rolls. I mean a lot. Normally it only takes a nachos and a burrito from Taco Bell to get my creative ideas flowing, but pizza rolls don’t have the same magical power as Taco Bell cheese so I improvised.

I ate hundreds of pizza rolls over the course of two days!

I’d like to say that’s an exaggeration, but I buy them at Costco and more than one box was consumed. Every time I started to get jittery and twitch, I’d pop a pizza bite into my mouth.

My creativity is back baby! My stomach is slightly off-balance and I feel exhausted just thinking about moving from any position, but none of that matters. All that counts is that my humor has returned. (How long do you think it will be until I can stand without wobbling again?! Nevermind, not important!)

Now, I’m off to write more posts while my body recovers from the 26 foot walk to the computer from the couch. And just so you know, there is a right way to eat a pizza roll and I will share it in another post. FYI, it takes 6 bites. I KNOW! Just blew your mind when all your life you’ve been popping them in your mouth whole and chewing. 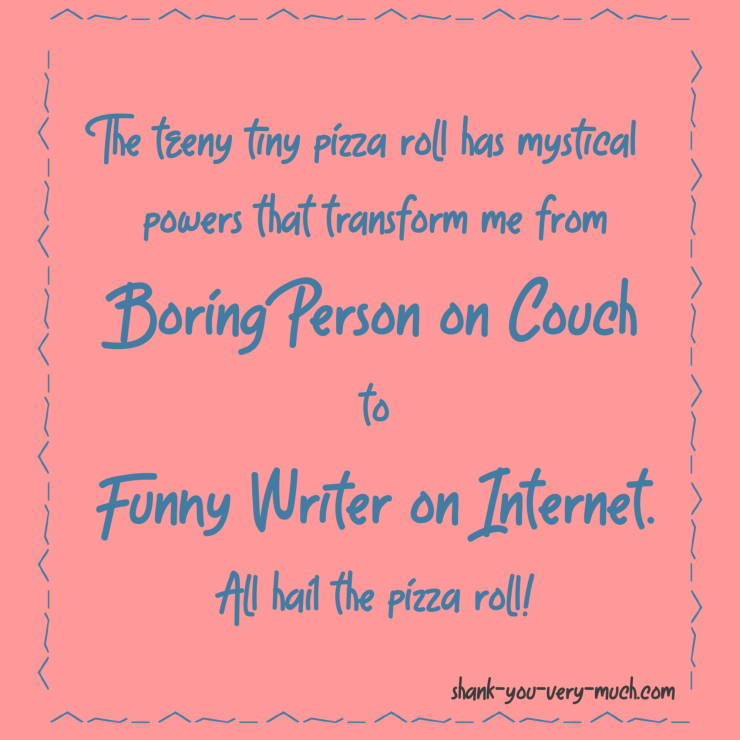